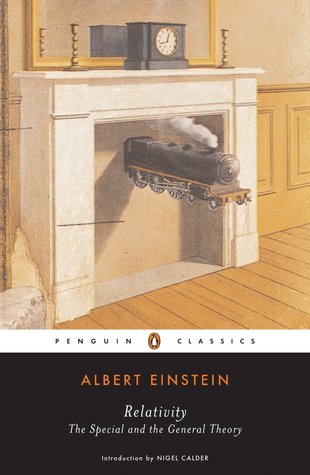 Relativity: The Special and the General Theory

An accesible version of Einstein's masterpiece of theory, written by the genius himself

According to Einstein himself, this book is intended "to give an exact insight into the theory of Relativity to those readers who, from a general scientific and philosophical point of view, are interested in the theory, but who are not conversant with the mathematical apparatus of theoretical physics." When he wrote the book in 1916, Einstein's name was scarcely known outside the physics institutes. Having just completed his masterpiece, The General Theory of Relativity—which provided a brand-new theory of gravity and promised a new perspective on the cosmos as a whole—he set out at once to share his excitement with as wide a public as possible in this popular and accessible book.

Here published for the first time as a Penguin Classic, this edition of Relativity features a new introduction by bestselling science author Nigel Calder.

For more than seventy years, Penguin has been the leading publisher of classic literature in the English-speaking world. With more than 1,700 titles, Penguin Classics represents a global bookshelf of the best works throughout history and across genres and disciplines. Readers trust the series to provide authoritative texts enhanced by introductions and notes by distinguished scholars and contemporary authors, as well as up-to-date translations by award-winning translators.

Readers Also Enjoyed Relativity: The Special and the General Theory

Six Easy Pieces: Essentials of Physics By Its Most Brilliant Teacher

On the Shoulders of Giants: The Great Works of Physics and Astronomy

The Road to Reality: A Complete Guide to the Laws of the Universe

Big Bang: The Origin of the Universe

The Black Hole War: My Battle with Stephen Hawking to Make the World Safe for Quantum Mechanics

Black Holes and Baby Universes and Other Essays

A Brief History of Time

Relativity: The Special and the General Theory Reviews

In 1879, Albert Einstein was born in Ulm, Germany. He completed his Ph.D. at the University of Zurich by 1909. His 1905 paper explaining the photoelectric effect, the basis of electronics, earned him the Nobel Prize in 1921. His first paper on Special Relativity Theory, also published in 1905, changed the world. After the rise of the Nazi party, Einstein made Princeton his permanent home, becoming