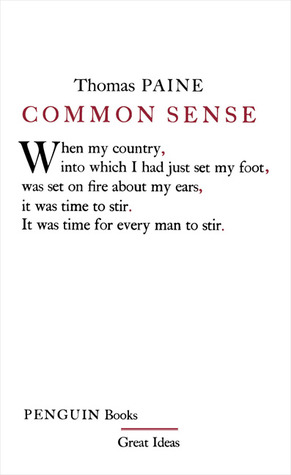 Throughout history, some books have changed the world. They have transformed the way we see ourselves—and each other. They have inspired debate, dissent, war and revolution. They have enlightened, outraged, provoked and comforted. They have enriched lives—and destroyed them.

Published anonymously in 1776, six months before the Declaration of Independence, Thomas Paine’s Common Sense was a radical and impassioned call for America to free itself from British rule and set up an independent republican government.
Savagely attacking hereditary kingship and aristocratic institutions, Paine urged a new beginning for his adopted country in which personal freedom and social equality would be upheld and economic and cultural progress encouraged.

His pamphlet was the first to speak directly to a mass audience—it went through fifty-six editions within a year of publication—and its assertive and often caustic style both embodied the democratic spirit he advocated, and converted thousands of citizens to the cause of American independence.

Whatever Happened to Justice?

Self-Reliance and Other Essays

Why Johnny Can't Read--And What You Can Do About It

The Constitution of the United States of America

Civil Disobedience and Other Essays

Thomas Paine was an English-American political activist, author, political theorist and revolutionary. As the author of two highly influential pamphlets at the start of the American Revolution, he inspired the Patriots in 1776 to declare independence from Britain. His ideas reflected Enlightenment-era rhetoric of transnational human rights. He has been called "a corset maker by trade, a journalist