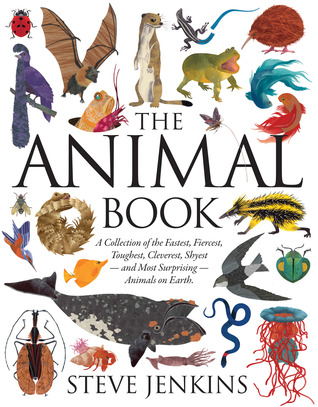 Animals smooth and spiky, fast and slow, hop and waddle through the two hundred plus pages of the Caldecott Honor artist Steve Jenkins’s most impressive nonfiction offering yet. Sections such as “Animal Senses,” “Animal Extremes,” and “The Story of Life” burst with fascinating facts and infographics that will have trivia buffs breathlessly asking, “Do you know a termite queen can produce up to 30,000 eggs a day?” Jenkins’s color-rich cut- and torn-paper artwork is as strikingly vivid as ever. Rounding out this bountiful browsers’ almanac of more than three hundred animals is a discussion of the artist’s bookmaking process, an animal index, a glossary, and a bibliography. A bookshelf essential!

Who Am I?: An Animal Guessing Game

Getting Started with Sensors: Measure the World with Electronics, Arduino, and Raspberry Pi

This Book Just Ate My Dog!

Steve was born in 1952 in Hickory, North Carolina. His father, who would become a physics professor and astronomer (and recently his co-author on a book about the Solar System), was in the military and, later, working on science degrees at several different universities. We moved often. Steve lived in North Carolina, Panama, Virginia, Kansas, and Colorado. Wherever he lived, he kept a menagerie of