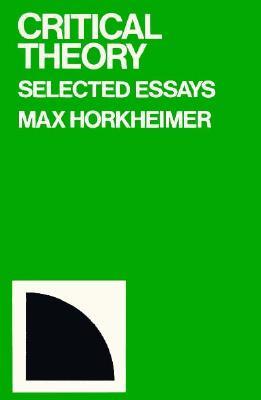 These essays, written in the 1930s and 1940s, represent a first selection in English from the major work of the founder of the famous Institute for Social Research in Frankfurt. Horkheimer's writings are essential to an understanding of the intellectual background of the New Left and the to much current social-philosophical thought, including the work of Herbert Marcuse. Apart from their historical significance and even from their scholarly eminence, these essays contain an immediate relevance only now becoming fully recognized.

Manufacturing Consent: The Political Economy of the Mass Media

One-Dimensional Man: Studies in the Ideology of Advanced Industrial Society

The Protestant Ethic and the Spirit of Capitalism

Ideology and Utopia: An Introduction to the Sociology of Knowledge

The Passions and the Interests: Political Arguments for Capitalism Before Its Triumph

The Hero With a Thousand Faces

Max Horkheimer (1895–1973) was a leader of the so-called “Frankfurt School,” a group of philosophers and social scientists associated with the Institut für Sozialforschung (Institute of Social Research) in Frankfurt am Main. Horkheimer was the director of the Institute and Professor of Social Philosophy at the University of Frankfurt from 1930–1933, and again from 1949–1958. In between those perio